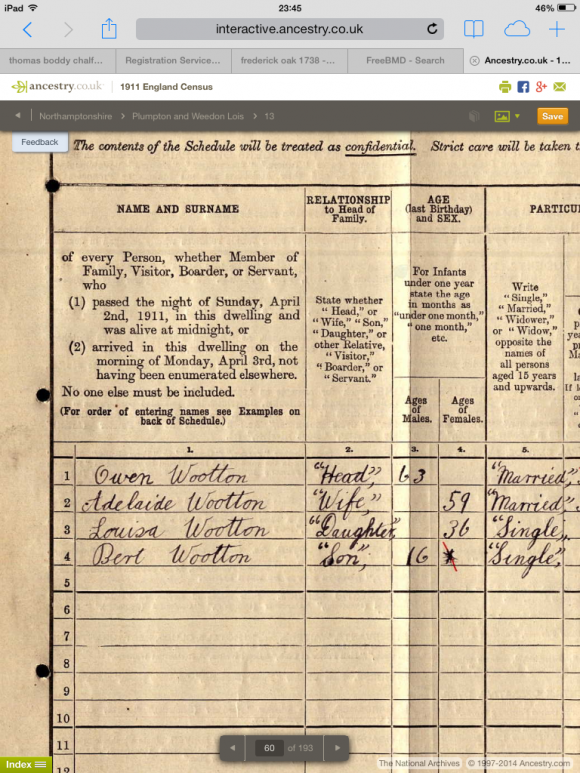 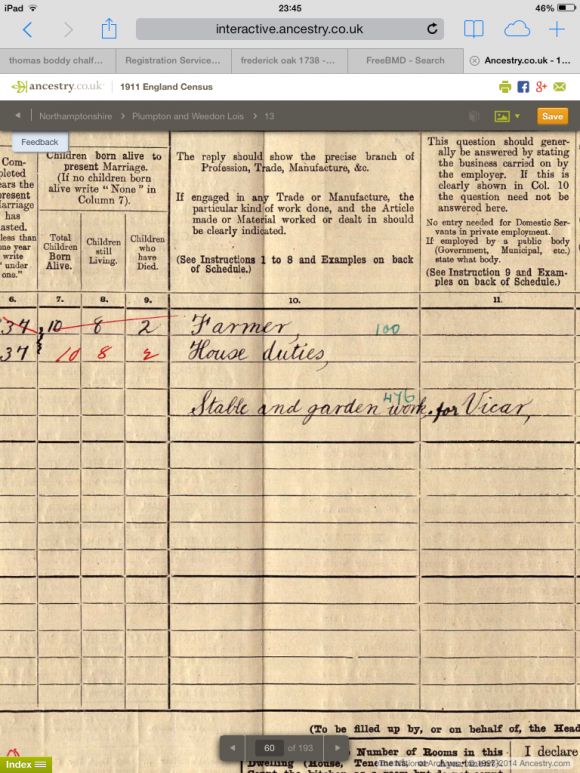 The 1911 census shows Owen Wootton and Adelaide Tyrrellhad been married 37 years (Apr-Jun 1874)..They had produced 10 children of whom 8 were living andand 2 infant deaths.At this time only 2 were living at home..Louisa aged 36 andBertie aged 16..Owen, Adelaide, and Louisa were all born in Sulgrave..Bertie was born in Milthorpe..Interestingly the census form was signed by 16 year oldBertie on behalf of Owen...Owen was a farmer.. Louisa's work is given as home dutiesand Bertie given as Farmer's son working on farm..Sadly Bertie was to lose his life in WW1 and is commemoratedin St Mary and St Peter's church in Lois Weedon.

Bertie was doing stable and
garden work for the vicar at the time of the census.. 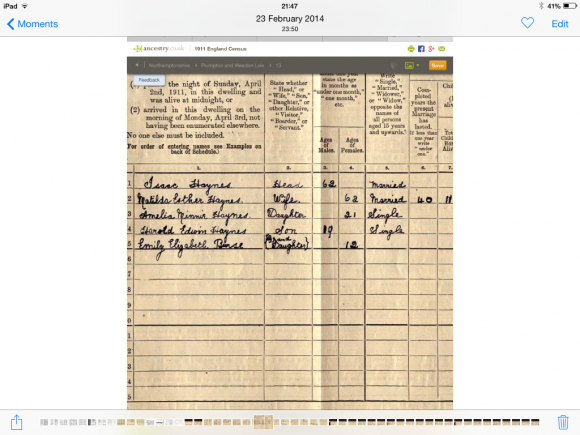 The next family I would like to look at are Isaac and Matilda Haynes..
They are living in Cattle End in 1911.. Isaac and Matilda are both 62
and have been married 40 years in that time they have had 11 children
10 of whom are alive in 1911.. Only 2 still at home with mum n dad..
Amelia Minnie is 21 and a domestic help..Harold Edwin is 19 and is
an apprentice house painter..
Isaac was born in Hook Norton Oxfordshire while Matilda was born
in Milthorpe.. Amelia and Harold both Lois Weedon..
Also living with them is Emily Elizabeth Burse Age 12, their
granddaughter.

Emily's mother Ada Elizabeth Burse (nee Haynes) had died aged 29
In 1902 when Emily was just 4... There was also a boy Ernest George
who was age 2 when his mother died.. I can't find him on the 1911
census but have found he married a Dorothy Leadbetter in Fulham
in 1926.. surely the same Dorothy Leadbetter living in Lois Weedon
aged 5 in 1911..
Emily didn't get married until 1932 when she was aged 34

Residents of the Cypresses (Castle Mound) 1911 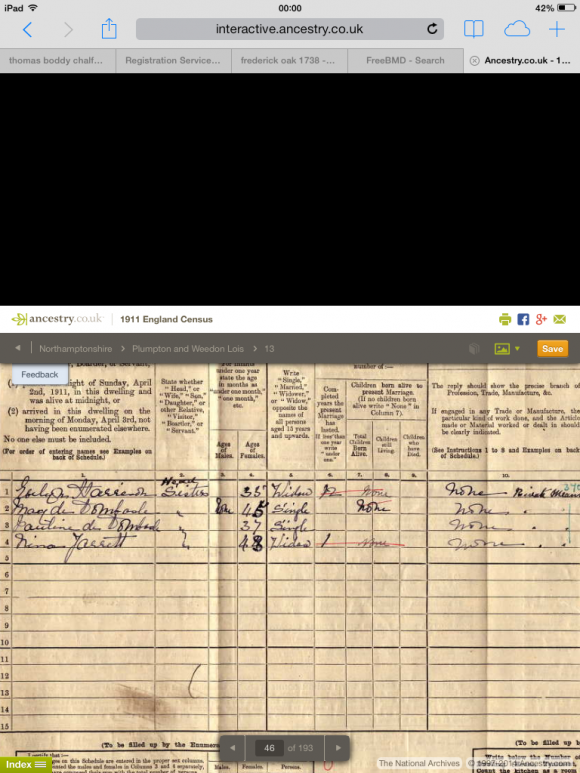 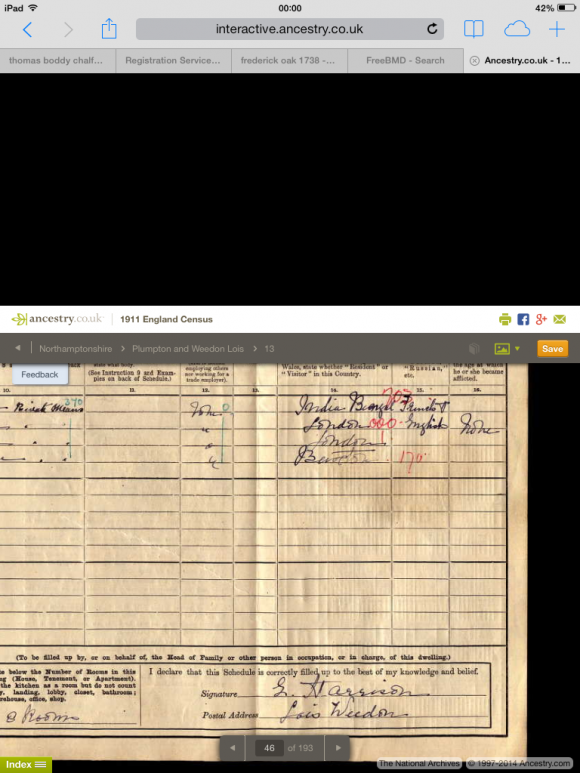 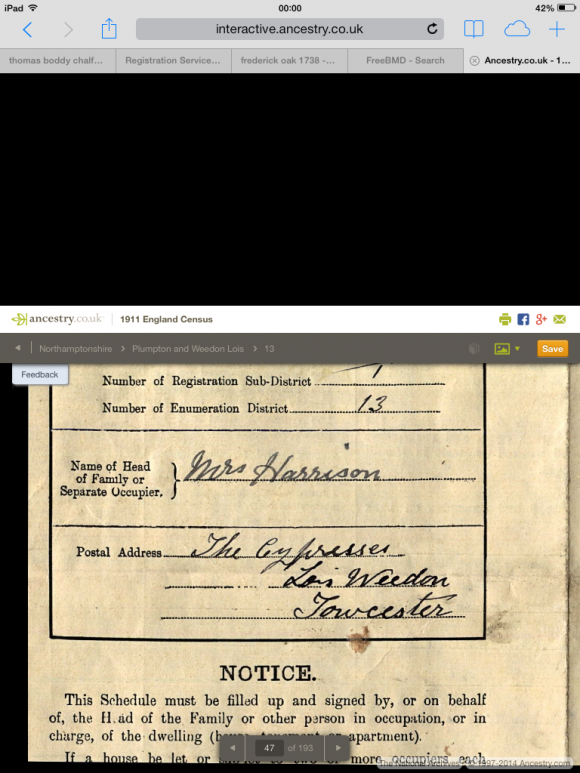 The married names are Harrison and Jarrett..The other 2 look like de Bomforde

On the left it says private means which relates to their income..
The First Lady was born in India Bengal, the next 2 are London 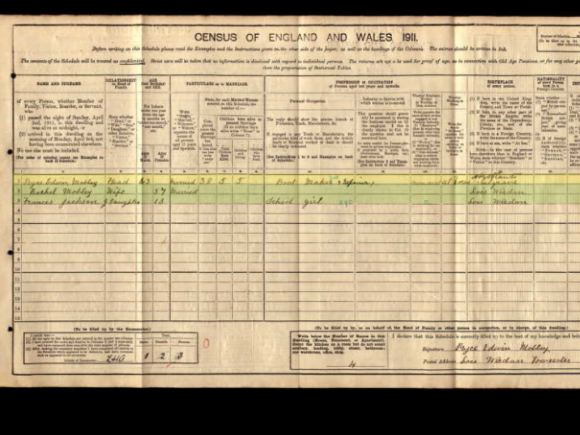 I believe these may be the people living in " Holly tree cottage "
In 1911.. I base that on an inscription in the church visitors book
where it is stated someone is visiting the graves of Pryce and Rachael
and remembering their fun holiday times at Holly tree cottage..
Of great interest to me as I now live in Holly tree cottage...
Pryce Edwin Mobley was 63 in 1911 and sadly passed away 3 short
years later in 1914..he was a boot maker and repairer..
Rachael Mobley (nee Humphrey) was 57 and lived to be 86 before
she passed away in 1943
In 1911 they had been married 39 years and had 5 children all surviving.
Their children had all flown the nest by now but on the night of
April 2nd 1911.. Frances Sarah Jackson age 13 their granddaughter
was living at the address.. Their daughter Florence Sarah had married
Mark Jackson in 1896..

You can find out about the parish council and how to contact them on this page.